Under Rice Policy No. 324 and applicable federal regulations governing federally sponsored research, if the Provost concludes that the allegations and evidence outlined in the Inquiry report have sufficient substance, an Investigation will follow. Prior to the initiation of any potential disciplinary process under Rice polices, the Provost will first appoint and convene an investigatory panel of at least three members (the "Panel"). Prior to appointing the Panel, the Provost will confer with the Conveyor of the Appeals and Grievance Committee of the Faculty Senate about potential Panel members. The Panel may consist entirely of Rice faculty or the Provost may appoint one or more individuals from outside the University who may bring particular expertise to the Investigation. A Rice faculty member shall chair the Panel.

a. Research misconduct means fabrication, falsification or plagiarism in proposing, performing, or reviewing research, or in reporting research results. Fabrication is making up data or results and recording or reporting them. Falsification is manipulating research materials, equipment, or processes, or changing or omitting data or results such that the research is not accurately represented in the research record. Plagiarism is the appropriation of another person's ideas, processes, results, or words without giving appropriate credit.

Function of the Panel. The Panel shall develop a factual record relating to the allegations of research misconduct and shall examine that record in order to make findings and recommendations to the Provost whether research misconduct occurred and, if so, by whom and the level of seriousness, including whether any publications may need correction or retraction. The Panel's findings and recommendations may include a recommendation to the Provost for other appropriate actions, including disciplinary or administrative actions.

b. The destruction, absence of or failure of a Respondent to provide research records which adequately demonstrate the questioned research is evidence of research misconduct when the University establishes by a preponderance of the evidence that a Respondent intentionally, knowingly or recklessly (i) destroyed research records that he or she had possessed or controlled, (ii) had the opportunity to maintain the records but did not do so, or (iii) maintained the records and failed to produce them in a timely manner, and the Respondent's conduct constitutes a significant departure from accepted practices of the relevant research community.

d. The Panel is not bound by formal rules of evidence, and may admit and consider evidence, including hearsay, for whatever probative value the Panel believes the evidence merits. The Panel should take into account the credibility ofRespondent(s), witnesses and other evidence in reaching its determinations. The Panel, in reaching its findings and recommendations, shall give due consideration to credible, material and relevant evidence of honest error or difference of academic opinion presented by a Respondent.

a. After being appointed, the Panel shall meet in executive session to review the charges of research misconduct, the Inquiry report and its recommendations, the decision of the Provost and discuss how best to proceed. The Panel may confer with the Research Integrity Officer and the Office of General Counsel for guidance and advice.

b. The Panel shall take reasonable steps to ensure an impartial and unbiased investigation to the maximum extent practicable, including participation of persons with appropriate scientific or other expertise who do not have unresolved personal, professional, or financial conflicts of interest with those materially involved with the Inquiry or Investigation.

d. The Panel shall use its best efforts to interview each complainant, Respondent and any other available person the Panel deems to have material information relating to any relevant aspects of the Investigation, including witnesses identified by a Respondent or the Research Integrity Officer that the Panel believes may have such material information. Final decision on which witnesses to interview shall rest with the Panel. The Panel, either collectively or by individual members, may interview any person singly or with others in any format it believes will aid it in compiling a full and fair record and in reaching its determinations, at its sole discretion. The Panel shall have the ability to recall witnesses if it believes it useful in concluding the Investigation. Should a complainant, Respondent or other person be accompanied by legal counsel during an interview or any other part of the investigatory proceedings, the counsel for the individual shall only be present to provide advice to his or her client and shall not participate in the interview or proceedings. Should the Panel permit an individual to be accompanied by legal counsel, the Panel will also have its University legal counsel present to advise the Panel.

e. When the Panel conducts any interviews, it shall have each such interview recorded and transcribed, and it shall provide each interviewee with a reasonable opportunity to review and correct the transcript of his or her interview.

g. The investigatory process is intended to be confidential, so the Panel should take reasonable and appropriate steps to protect the confidentiality of its proceedings, the participants and the evidence gathered, but such steps shall not impair the ability of the Panel to compile whatever information and evidence the Panel believes necessary to fully and fairly reach its findings and recommendations.

c. The Panel should review and consider any comments it receives to the draft report when finalizing the report, and attach the comments received to the final Investigation report.

d. The Investigation report must be in writing and include the following:

e. After the Panel has prepared its final report, it shall submit the report to the Provost, with a copy to each Respondent of the full report or those portions relevant to that Respondent.

e. Recommendations: If there is a finding that research misconduct has occurred, the Panel may recommend appropriate sanctions based on its understanding of the case. Even if the Panel concludes that research misconduct did not occur, it is nonetheless free to make recommendations as a result of the Investigation or a finding that other violations of University polices or procedures may have occurred.

Time Period for Investigation. The Panel should complete the entire Investigation within 120 days from the date the final membership on the Panel is set, including the preparation of the draft and final report and submission of the final report to the Provost. If the Panel decides that it will need additional time to complete its work, it shall communicate its request for additional time, including the amount of additional time it believes necessary and the justification for the extension, to the Research Integrity Officer, who will consider and act on the request, including communicating with any federal agencies whose concurrence may be required for an extension.

Review by the Provost. After the Panel provides its final report, the Provost, at his/her discretion, may (i) ask any or all of the Respondents for their final written comments; (ii) seek clarification on various matters from the Panel; and/or (iii) refer the matter back to the Panel for additional investigation if he/she deems it necessary or appropriate. Afterwards, the Provost will conclude the Investigation by formally receiving the report. The Provost will then render his or her decision in a letter or memorandum that notes agreement or disagreement with the Panel's findings and recommendations and determines whether further administrative or disciplinary action on the part of the University is appropriate. The Provost's decision is final. The Provost will send a copy of the decision to the Research Integrity Officer, the Respondent(s), and the Panel members; he/she may also communicate the relevant results to any complainants. If further administrative or disciplinary action is appropriate, the Provost will send a copy of the final report and his/her decision to the President, the relevant dean( s) and/ or the Vice-President for Administration so that further action may be initiated.

Retention and Custody of the Record. The Vice Provost for Research shall maintain in a secure manner the records of research misconduct cases, including the evidence compiled and considered by the Panel, the Inquiry Report, the Investigatory Report and the Provost's review, for at least 7 years after completion of the research misconduct process. 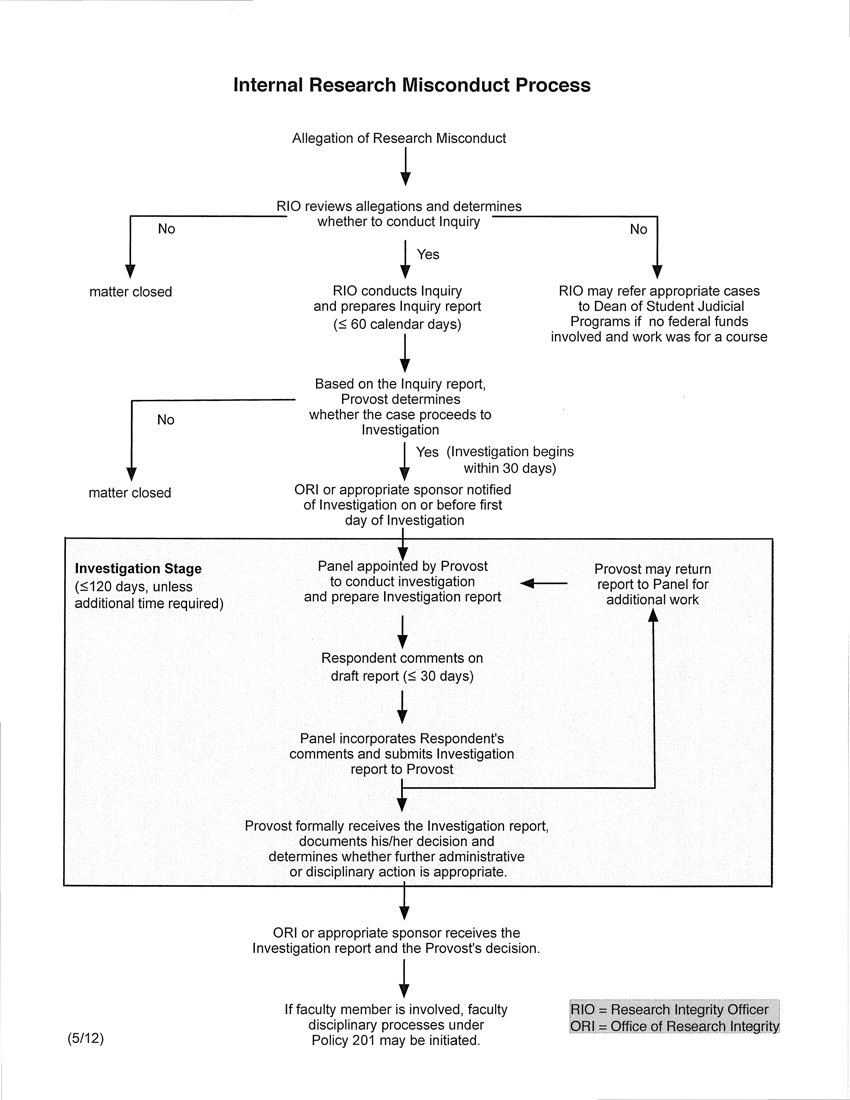